Seventy-five years covers much of a human life, but only part of the life span of a saguaro cactus. Sweetwater Center founders and board members, Tom Orum and Nancy Ferguson, have published findings from 75 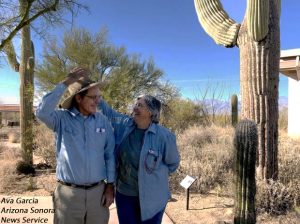 years of annual saguaro censuses at Saguaro National Park near Tucson, Arizona. Nancy and Tom have carried out this work for over half of the entire study period. Their research report appeared in the online open access scientific journal PLOS ONE in August 2016.

Tom and Nancy started counting and measuring the saguaros while they were both researchers at the University of Arizona. Now retired, they continue to monitor the 60-acre study area each spring. Journalist Ava Garcia profiled the couple in a February 2018 story on the Arizona Sonora News Service.

The long-term study began in 1941 to learn why so many saguaros were dying in the Rincon Mountain District of Saguaro National Park, east of Tucson. Biologists had also noticed that few new saguaros were germinating and growing; they feared these iconic cacti might disappear from the park.

Saguaros in this study area have grown old and died over the past 75 years. Today, there are fewer than at the start of the study. Although more saguaros grow today than in 1941 in  some nearby areas, less than half as many grow today in Nancy and Tom’s study area. However, decades of careful data collection have laid to rest the fear that these charismatic megaflora might vanish. 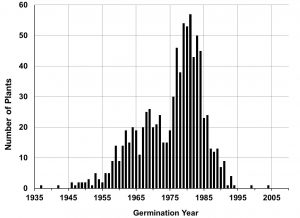 This long-term study found that, although few new saguaros germinated during the 1940s and 1950s, the following three decades were good times for young saguaros. In fact, the years from 1979 and 1984 saw a saguaro “baby boom,” with between 40 and 55 new plants germinating and growing each year in the study area. However, recent years have seen few young saguaros start life. Since 1993, only three new saguaros have established in the study area.

The three decades when so many young saguaros got their start were wetter than average in the Sonoran Desert. There were many El Niño events during this time, which tend to bring increased winter rainfall to the southwest U.S. In contrast, the decades before and after the wet period were much drier than average. Tom and Nancy concluded that almost all the saguaros that germinated since 1993 perished from drought before they were big enough for the researchers to find them. 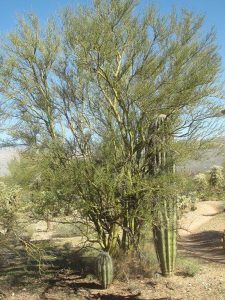 Abundant rainfall helps saguaros in two ways. In addition to helping the plants themselves survive and grow, wetter conditions also benefit the trees that serve as “nurse plants” for tender young saguaros. Tom and Nancy found that saguaros growing under palo verde and mesquite trees are more likely to survive than those growing under other, smaller plants or in the open. The trees shade young saguaros to keep them cool. This is especially important during the fore summer, when temperatures soar before summer monsoons start.

Cold weather also threatens these desert cacti. Temperatures that drop well below freezing for the better part of a day can kill saguaros, especially the oldest and youngest plants. In 2011, a catastrophic freeze killed all of the oldest saguaros and many of the older saguaros, over 80 years old. All of the middle-aged plants (30 to 80 years old) survived and almost all young saguaros survived the freezing temperatures to face other challenges later in their lives. Most of the young plants that didn’t survive grew under small nurse plants or in the open, with little or nothing to protect them.

Today’s young saguaros will face many challenges in their next century of life. Warming temperatures and increasingly variable precipitation will test the endurance of both saguaros and the nurse plants that protect them. Invasive buffelgrass is spreading a new threat across the Sonoran Desert. This nonnative grass grows in dense stands that carry wildfires and kill saguaros.

The researchers point out that, “[just] as it was impossible to know in 1960 that three decades of regeneration lay ahead for this population of saguaros, it is not possible to know what the next century will bring.”